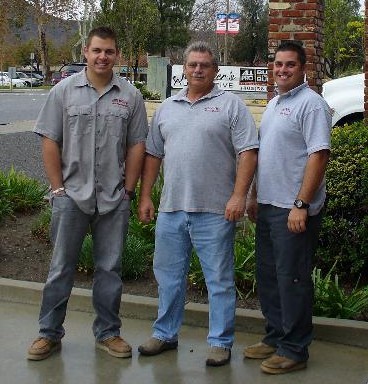 Prior to starting in the building materials business, my father was a masonry and concrete contractor and I worked for him. He had a lease on Canoga Ave just south of Devonshire in the recession of 1982, times got very tough for the construction industry. Since we had the yard, I had asked if we could put some extra block and brick on the front lot to start selling them, and of course he said yes. That was the start of Pacific Building Materials, about July of 1981.
In 1984 we were going to lose the lease on the property because the owner wanted to put up a building. I knew the next door neighbor and he also had a vacant lot without an office. I bought a 40 foot trailer to be the office and moved next door over the weekend. It was pretty funny seeing the contractors face Monday morning scratching their heads trying to figure out what had happened. We stayed there for another 2 years until I was given notice that he also wanted to build a building on the property. Here we go again…
It was late in 1985 when one of the salesmen told me about the yard for sale in Simi Valley, Known as Simi Builders Supply. The owners were Bob and Mary Walters, and they were looking to retire. We had several conversations and finally reached an agreement for the sale of the business. So in the last week of December we started moving the business from Chatsworth to Simi Valley and the official first day of business in Simi was Jan 10th 1986.
Having customers under the name of Pacific Building Material and Simi Builders Supply and not wanting to alienate either of the customer bases, I decided to call the company Simi Pacific Building Materials.
Simi Pacific is a family run business and my son Anthony joined in 1993 as a yardman. He learned how to drive trucks, deliver materials, counter sales, dispatch the delivery loads, and is now the Manager. My other son Vince joined in 2006 learned the yard, counter sales, inventory on a daily basis. I am a proud Father to have them working with me on a daily basis. We take pride in what we do and I am a proud supporter of the Boys and Girls Club of Simi Valley and the Simi Valley Police Department.
-Joe Cassella